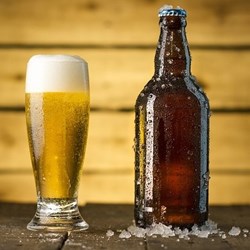 Sorbon Estates have agreed a new lease with Crafty Taproom at 77 Marlow High Street which was previously occupied by Café Copia.

This will be Marlow's first craft beer bar and shop and is expected to open by mid-November. The shop will focus on craft beers serving a wide range of independently brewed beers as well as fine wines and liquors. In addition, a central part of the concept will be a regularly changing menu of small plate dishes.

Founded by Phil Reeve, Crafty Taproom will be a family-run business, with Phil's wife, Johanna, daughters, Lois and Mia, and brothers-in-law, Dan and Harry, all set to work at the shop or in kitchen after launch next month.

The UK's craft beer market remains popular, growing by 0.8% in 2018 according to the most recent British Craft Beer Report 2019 by the Society of Independent Brewers (SIBA). The report revealed that consumers are increasingly drinking alcohol less often, and instead focusing on the quality of what they drink, choosing quality products such as local craft over mainstream beers. This local element is especially relevant to craft brewery products, as only 2% of UK adults think 'craft beer' can be made by a multinational, global brewer while 43% of consumers think 'craft beer' can only come from a small brewer and 42% think it must come from an independent brewer. Tellingly, 45% of consumers are happy to pay more for genuine craft beer.

Phil Reeve, Founder of Crafty Taproom: "I've been a craft beer enthusiast for years, so to have the opportunity to bring this dream into reality is incredible. Marlow is a vibrant town with a deservedly popular range of pubs and restaurants, but we felt that it was missing a bespoke craft beer establishment. As an independent, retailer we can remain focussed on serving an interesting and varied mix of beers, including those produced by local craft beer makers, and will have ten taps in store so that people can come in and discover the latest batch of local beer.

"We look forward to forging new relationships with local suppliers, both established and new, and promoting the best that Buckinghamshire and Berkshire have to offer by bringing an exciting range of craft beers to our customers."

Ed Davidson, Leasing Manager at Sorbon Estates, said: "Crafty Taproom brings an entirely new concept to Marlow and will further strengthen the town's appeal as a real hub and destination for food and beverage. We remain committed to bringing unique and interesting offers to Marlow High Street, with promoting independent retailers at the core of our strategy. This tenant ticks all of those boxes and we can't wait for them to open and see the impact that they have on this already thriving High Street."

Sorbon Estates was advised by Smart 4 and KLM.