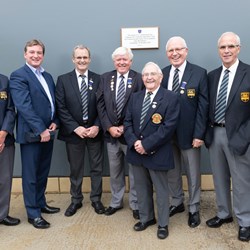 A major milestone in the development of a multi-million-pound centre of bowling excellence in Maidenhead has been marked by the visit of Commonwealth silver medallist in the sport John McGuinness, who is also the current Captain on the England National Team.

The successful topping out ceremony was marked by a plaque unveiling, speeches from Mr McGuinness, Tamra Booth of Sorbon Estates, and Desborough Bowling Club's President John Bucknell. A pine tree was also erected on the roof of the new building and a commemorative trowel presented to Mr McGuinness.

The exciting project is the culmination of many years of work between Sorbon Estates and Desborough Bowling Club to provide a holistic solution to plan, design and construct the building; with Sorbon Estates identifying and purchasing the Green Lane site after an extensive search to find a suitable alternative location for the club.

CHQ Architects, Baldock, were appointed by Sorbon Estates to meet the requirements and specification of Desborough Bowling Club. Once the design was agreed a planning application was prepared and submitted to RBWM.

Managing the construction, Sorbon Estates worked alongside Desborough Bowling Club to ensure a turn key scheme - allowing the club to make use of their new centre immediately after completion, in time for the 2019 bowling season. The new state-of-the-art facility in Green Lane will include a purpose-built clubhouse served by a generous car park, an eight-rink indoor green and a six-rink outdoor green. The last steel frame was finished on 10th August and the roof cladding was completed on 23rd August.

John McGuinness said "The new Desborough Bowling Club will be a great asset to the Maidenhead community. We hope its presence here will create a meeting point for bowling enthusiasts. It is a pleasure to be part of this ceremony."

Tamra Booth, Managing Director at Sorbon Estates, said, "The team at Sorbon Estates have worked closely with Desborough Bowling Club since this project's inception and it is really gratifying to hit this important milestone.  Mr McGuinness' visit has made it particularly special.  The building has been designed with maximum utility in mind for both existing and future members.  We look forward to the formal completion and the first jacks rolling on the greens."

John Bucknell of Desborough Bowling Club said, "This is a really important project for Maidenhead and one which we are delighted to have been involved in. The new centre of excellence will put Maidenhead on the national and international bowling map and will offer bowlers the opportunity to play in all seasons.  We are confident it will also help to attract new players to the game.  The expanded clubhouse will enable us to further develop the social aspect of the sport which is something we are keen to encourage.  We look forward to welcoming lots of new members from the local area."